Ghost Recon Wildlands is an exciting game that will help you both polish up some strategic skills and spend your spare time in a wonderful way. It is an open world tactical shooter video game developed by Ubisoft Paris and can be played on Xbox One, Microsoft Windows and PlayStation 4. Although this game features a setting similar to the original Tom Clancy’s Ghost Recon, it is the biggest open world game ever published, including mountains, forests and deserts.

Ghost Recon Wildlands takes place in the expensive and vibrant backdrop of Bolivia, South America. The influential Santa Blanca Mexican drug Cartel has turned the country into a drug-state which leads to violence, injustice, fear and lawlessness. The rise in power of these drug cartels concerns the United States Government, as they have become a world threat. In order to stop this, the US Elite Special Operations team called “The Ghost” tries to create chaos in the country that will break the alliance between Santa Blanca Cartel and the corrupted govern.

Ghost Recon Wildlands features a great variety of environments, such as desserts, mountains and forests. Whilst exploring these areas, players are able even to parachute. It is a third-person shooter game set in Bolivia that puts players’ minds at try with its unique and real-world landscapes. Gamers play as a member of the Ghost and try to get rid of the violence and lawlessness in the country. Being set in modern day, the weaponry featured in the game is more realistic and similar to the weapons used nowadays by most militaries. What is more is that drones are featured and can be used not only to highlight enemies or objectives, but also as weapons in an attack. Carrying out missions during daytime allows players to spot enemies easily, while completing missions at night offers gamers a tactical advantage, as the darks gives them a better concealment.

What is best about Ghost Recon Wildlands is that it is the first entry to feature an open world with nine different types of terrain – mountains and deserts – and with weather system. This game gives the impression of a real world mission, because players are tasked with making observations before finishing a requirement. They can travel from a location to another with a variety of vehicles, including dune buggies, cars, tanks and dirt bikes. Players can also opt for a more adventurous way of travelling – parachuting from a helicopter. What differentiates even more Ghost Recon Wildlands from its predecessors is the fact that it features side-missions.

Players are able to use various ways in order to complete the objectives – they can use the long-ranged or short-ranged gadgets provided in the game, stealth or melee combat. The game has got a positive feedback from the players especially due to the possibility of exploring the game’s world between missions. As you can see in action movies, players can grab an enemy with one hand in self-defense and shoot with the other hand, if necessary.

While resting between missions, players might want to interact with others and build relationships with those around them. Ghost Recon Wildlands provides gamers with a great range of non-playable characters, such as the officials, the rebels of the world or the citizens with whom players can interact. Although players are not in a mission, they have to be careful when interact, because a wrong conversation might have a negative effect on achieving their objectives. Having an impact in the game’s world and bringing consequences, these interactions require strategy and precision.

In order to level up, players have to gain experience points by completing missions and carefully interact with those around him. In addition, they can customize their character to suit them best and will even be given some experience points. At the end of a mission, players are able to equip to the Ghost the loot they found on enemies’ corpses. So as to give gamers some help, weapons and gear can be upgraded, which will make them blow more and more damage to the opponents. As if it was not enough, the AI of the game is unscripted and the players have their own agendas and motivations. Unreal as it may seem, Ghost Recon Wildlands is like a second real world.

The game gives players the opportunity to choose between single or multi player. There is featured a four-player co-operative multiplayer where gamers can be joined by other players with the aim to explore the game’s world and to complete specific requirements. Yet, if the game is solo played, the players will be accompanied by three AI groups to which they can give orders. 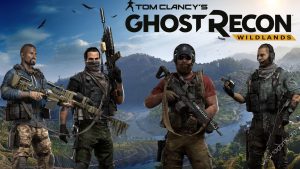 The initial reception of Ghost Recon Wildlands had positive feedbacks both from the critics and from the players, due to its real design. It has been claimed that the open-world design of the game is far away from the typical design its predecessors from Ubisoft used to have. Having been called one of the most surprising reveals in 2015, the game has reached the height of popularity among teenagers in quite a short amount of time. It was not only nominated for the Best PlayStation 4 Game, Best Xbox One Game or Best PC Game Awards, but Wildlands also won the Game Spot’s Best Awards. As if it was not enough, Game Informer named the game both the best co-operative and the best shooter.

Although Ghost Recon Wildlands’ development began in 2012, it was officially published at the end of 2015. Before its release, the publishers – Ubisoft – claimed that Wildlands would be the biggest and realistic open-world environment they have ever created. In order to practically recreate Bolivia, the developer had to visit the whole country and to discover its hidden places. Moreover, he had to ask the locals for their cooperation so as to find the country’s mysteries and traditions.

All in all, Ghost Recon Wildlands is the most interactive game someone has ever played and if you decide to try it, you have to bear in mind that it gives addiction. It will not be easy to give it up.