The Pokemon monsters in the popular augmented reality video game Pokemon Go come in all shapes and sizes. Each one has a different appearance, statistics and attacks that make them unique. If you are hunting rare Pokemon, but want to know which Pokemon haven’t been caught yet, this is article is ranking rare Pokemon.

These hard to find Pokemon can drive players crazy in anticipation, although we’ve already crowned the world’s first Pokemaster.

Some of the Pokemon on our list haven’t even been spotted yet, that’s how rare they truly are. When you want to know which monsters haven’t been seen or captured yet, check out this ranking rare Pokemon countdown.

Ranking Rare Pokemon nobody has caught yet 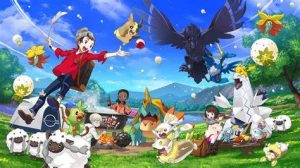 Kicking off our ranking rare Pokemon list is one of the strangest monsters in Pokemon Go. Although breeding is not yet in the game, Ditto is one of the only Pokemon that can breed with any other type.

The legendary Pokemon known as Mewtwo is also yet to be found or caught in Pokemon Go. He’s been part of the first Pokemon Go teaser, in which players battle Mewtwo together. This hints at large Pokemon Go events that will reward players for coming together to achieve a common goal.

In the Times Square video above you see Pokemon Go players attacking and eventually catch Mewtwo after defeating him. Niantic Labs has been hush hush about certain details, but a Pokemon Go event like this would be pretty epic.

When ranking rare Pokemon, one can’t forget about Mew. This cute Pokemon was part of the scientific experiments that led to Mewtwo’s creation. Nobody has seen Mew yet in the game, but Reddit members of pokemongo have uncovered code that confirms the existence of these Pokemon.

Articuno, Moltres, and Zapdos the Legendary Birds of Kanto

All three of these monsters round out our ranking rare Pokemon countdown. These rare Pokemon have been recognized in the code of Pokemon Go, confirming their existence, however nobody has seen or caught them yet.

These three Pokemon are found individually in Pokemon Go, and there’s been people who modified code to get some of these rare Pokemon to appear.

What do you think about our countdown to ranking rare Pokemon? Think we missed any entries? Let us know in the comment box below!/