If you are bored of the way the minecraft animals look in the game, or simply fancy a change to brighten them up, make them look more fun or appear more smoothly animated, there are a number of texture packs available for the game which will alter minecraft animals’ appearances. Here are some of the most popular texture packs, with a picture and link to each:

Minecraft 4 Kids is a beautifully animated texture pack, which in addition to making terrains and blocks more smooth and 3d looking gives the minecraft animals new cuter, more detailed faces and smoother bodies which give them a childish appeal. 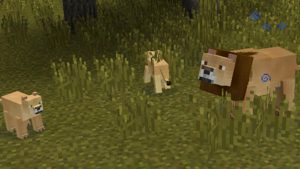 The tronic texture pack is a HD pack designed to give minecraft an electronic feel similar to the Metal Gear Solid training missions. Here we see what a pig looks like in the pack, without its traditional pixelated look and a more 3D and high definition finish.

Ever wanted to transform the animals in minecraft into something totally out of this world? Well now you can with the Aleph Setei mod, which changes everything in the minecraft world into something alien, such as the chicken which as seen in the picture above transforms into a bright red insectoid!

A texture pack designed to change the look of minecraft animals more subtley is Bias’ Stubby Stack pack. this texture pack is a stubby, fluffy and poofy alternative to the original minecraft textures, with the slight difference probably best viewed for yourself.

Another texture pack designed to give the game a more cartoony look is the Craftycraft texture pack. In this pack there are more cartoon like versions of each animal, including a few different coloured wolves and a more friendly looking pig. 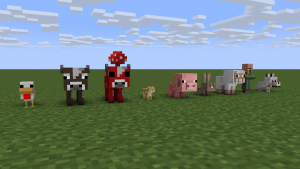 The Mine Co. Adventures texture pack offers a wealth of variety for everything in the minecraft world, including a new skin for every mob such as this multi coloured wolf above.

The Xaiwaker texture pack was made with the intention of giving perfect mixtures of colour, rich textures and adventure, inspired by Zelda and Animal Crossing. Each minecraft animal gets a new colourful look, which look great compared to the standard more dull versions.

So there we have it, some great texture packs that will transform the look of your minecraft animals giving a wide range of new and unique appearances which are more pleasing on the eye. Why not install them today and see the impressive visual changes for yourself!